Shipton-under-Wychwood is a village and civil parish in the Evenlode valley about 4 miles north of Burford, Oxfordshire. The village is one of three named after the ancient forest of Wychwood 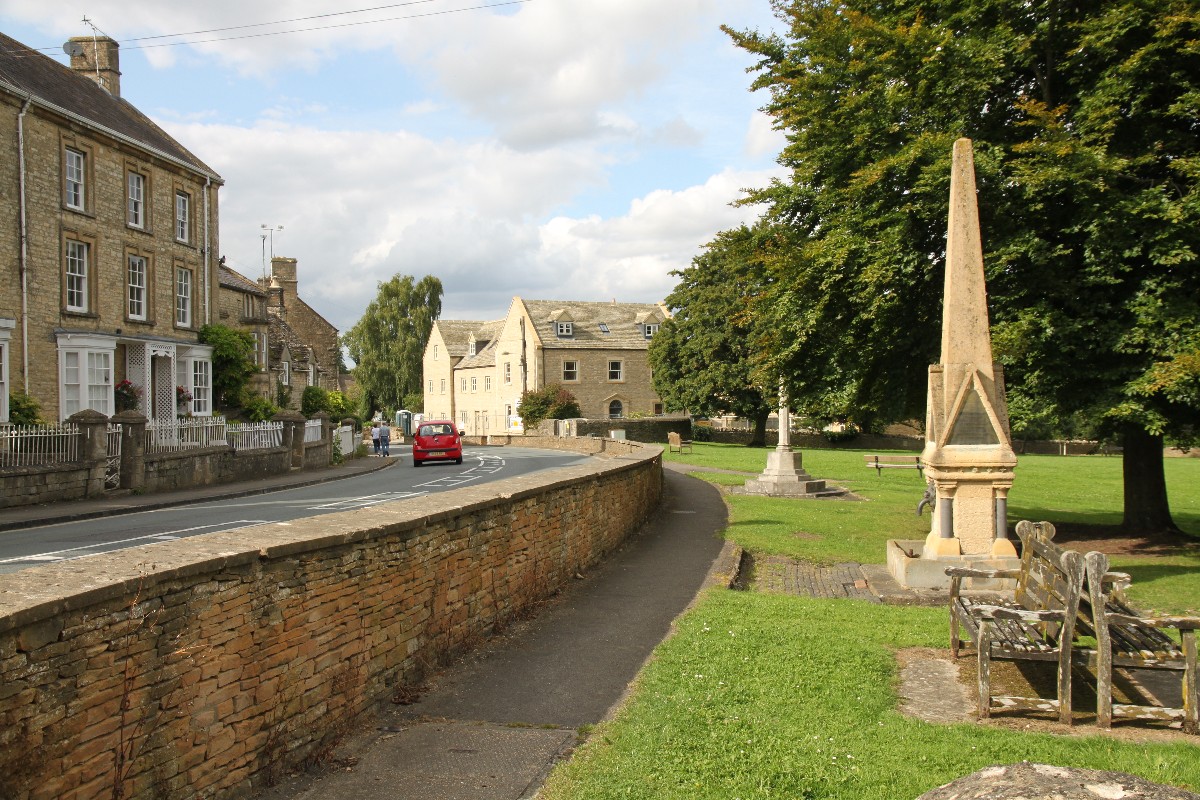 CHARLES EDWARD COOMBES was serving as a Private with "C" Company, the 6th/7th Battalion, The Royal Scots Fusiliers when he was accidentally killed on 23rd November 1917. He was aged 29 and is buried in Level Crossing Cemetery, Fampoux near Arras.

He was the son of Samuel and Martha Coombes of 6, Church Lane, Shipton under Wychwood. He enlisted into the Royal Scots Fusiliers on 15th February 1916 whilst living in Lutterworth, Leicestershire where he worked as joiner. He served on the home front until 1st September 1916 when he joined the 6/7th in France. He was in action in two phases of the 1916 Somme Offensive, The Battle of Flers-Courcelette between 15th and 22nd September and the Battle of Transloy Ridges, between 1st October and 11th November.

In spring 1917 the Battalion was involved in the Arras Offensive, taking part in the 1st Battle of the Scarpe. Private Coombes was wounded in action on 23rd April 1917 during the 2nd Battle of the Scarpe, with a gun shot wound to the elbow joint. He was evacuated to England and admitted to Bovington Military Hospital on 28th May. He returned to his unit in September 1917. His company were holding front line trenches in Monchy from 18th September. They were relieved on 23rd September and returned to their billets where they went on parade. Private Coombes was at the front of his platoon when a rifle, discharged by Private D. Andrews in the rear rank of the platoon, hit him in the back killing him instantly. A court of enquiry was convened and it was adjudged that Private Andrews had been negligent in leaving a live bullet in the magazine of his rifle and leaving the safety catch off. When he closed the rifle bolt he accidentally touched the trigger and fired the round. He was known to be a very careful soldier with regard to his rifle, but sent to be tried by Field General Court Martial. He was sentenced to a year in prison but this was commuted then suspended.

ALEXANDER FRANKLIN was serving as a Private in the 1st Battalion, The Royal Warwickshire Regiment and died of his wounds while a German POW, on 7th May 1917. He was aged 33 and is buried in Charleroi Communal Cemetery in Belgium.

He enlisted into the RWR in April 1916 at Chipping Norton and joined the 11th (Service) Battalion in France in July that year. He was in action during the Somme Offensive and wounded by shrapnel in the chest on 1st August 1916. He was evacuated to hospital on the No 16 Ambulance Train. After recovery he was posted to the 1st Battalion, seeing action in the First Battle of Scarpe in April 1917. He was taken prisoner after being wounded during the Third Battle of Scarpe, part of the Battle of Arras, on 4th May 1917, dying in the Belgium town of Charleroi.

He is also commemorated on the Chipping Norton war memorial.

JOHN LONGSHAW was serving as a Private in the 2nd Battalion, The Oxfordshire and Buckinghamshire Light Infantry when he was killed in action on 30th April 1917. He was aged 23 and is commemorated on the Arras Memorial, having no known grave.

He was the son of John and Ellen Longshaw of Shipton under Wychwood and had worked as a farm labourer before the war. He enlisted into the Oxford and Bucks in Oxford on the outbreak of war. He was posted to the 3rd Reserve Battalion and then the 6th (Service) Battalion arriving with that Battalion on 22nd July 1915. They were involved in the attack towards Fromelles on 25th September 1915, a diversionary action for the Battle of Loos, where the 6th held the trench line.

He transferred to the 2nd Battalion and saw action in phases of the 1916 Somme Offensive. In 1917, as part of the 2nd Division, they cautiously pursued the Germans as they made their strategic withdrawal to pre-prepared defences on the Hindenburg Line, leaving a trail of destruction behind them. On 11th April 1917 they moved up to Vimy Ridge as part of the Arras offensive, supporting the Canadian Corps. This was followed up with the Battle of Arleux on 28th April. Private Longshaw was reported missing at Oppy, one of 3000, dead, missing and wounded from the 2nd Division in the battle.

WILLIAM PITTAWAY was serving as a Private with the 3rd Battalion, The Coldstream Guards when he died on 1st November 1918. He was aged 38 and is buried in St Mary's Churchyard, Shipton-under-Wychwood.

He was the son of Anthony and Harriett Pittaway, of Shipton-under-Wychwood. He was lodging in Birmingham, working as a general labourer when he enlisted into the Coldstream Guards in February 1904. He served with the Colours for 5 years before transferring into the reserves. He was recalled for service on the outbreak of war and joined the 3rd Battalion in France on 30th August 1914.

LEONARD RAINBOW was serving as a Private in the 2nd Battalion, The Oxfordshire and Buckinghamshire Light Infantry when he was killed in action on 21st October 1914. He was aged 19 and is commemorated on the Ypres Menin Gate Memorial, having no known grave.

He was the son of Robert and Eliza Rainbow of Blenheim, Shipton under Wychwood but was living at Park Farm, Kirtlington, working as a general labourer before enlisting. He joined the Ox and Bucks in Oxford and arrived in France on 1st September 1914, joining the 2nd Battalion in the field. The Battalion,as part of the 2nd Division, were  moved from the Aisne to to take up positions between Zonnebeke and St Julien on 20th October. They attacked towards Passchendaele on 21st October, only a limited advance was made, reaching the Zonnebeke to Langemarck Road, in the Battle of Langemarck, part of the First Battle of Ypres. Private Rainbow was killed in this action.

His elder brother Robert had joined the Royal Artillery in 1899 and saw action in South Africa. He died of pneumonia whist serving at Devonport in 1908.

WILLIAM ROBERT TURNER was serving as a Private in the 2nd Battalion, The Oxfordshire and Buckinghamshire Light Infantry when he died of his wounds on 17th February 1917. He was aged 25 and is buried in Contay British Cemetery.

He was the son of Robert and Rose Turner of Shipton under Wychwood and had worked as a carter on a farm. He enlisted into the Oxford and Bucks in Oxford and was sent to France to join the 2nd Battalion. At the beginning of 1917 the Battalion, as part of the 2nd Division, were holding trench lines along the Ancre River. After the bad weather that had halted the Somme Offensive in November 1916, trenches were cleaned and pumped out and defences rebuilt. On 17th February the 2nd Division attacked German positions on high ground near the village of Miraumont. About 100 yards of ground was gained with a similatr number of casualties, including Private Turner who was wounded in action and died in a Casualty Clearing Station in Contay later that day.

FREDERICK JOHN NORTH was serving as a Sergeant with the 22nd Battalion, The Royal Fusiliers (City of London) Regiment when he died on 31st August 1941. He was aged 36 and is buried in St Mary's Churchyard, Shipton under Wychwood.

He was the son of George Henry and Ann Maria North, having been born in Easton Grey in Wiltshire. He married Agnes Wright at Shipton-under-Wychwood in the summer of 1939.

JOHN FRANCIS WRIGHT was serving as an Officer Cadet with the Royal Corps of Signals when he died on 10th April 1944. He was aged 19 and is buried in St Mary's Churchyard, Shipton-under-Wychwood.

He was the son of Ivan and Edith Mary Wright, of Shipton-under-Wychwood. He was educated at Christ Church College, Oxford and died in Maidstone, Kent.