Swerford is a village and civil parish on the River Swere in the Cotswold Hills in Oxfordshire, England. It is about 4 miles northeast of Chipping Norton. Swerford has two main neighbourhoods: Church End and East End. 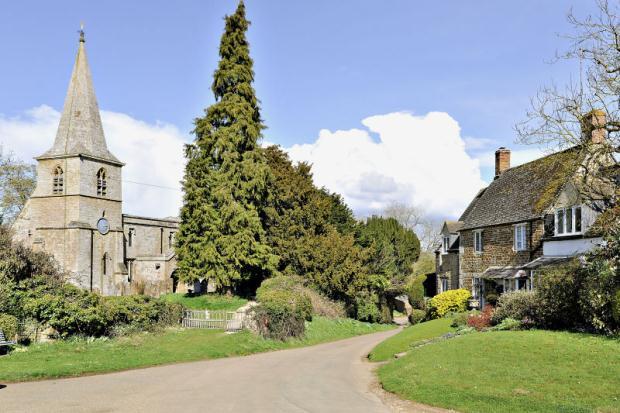 ALFRED BARNETT was serving as a Private in The Royal Marine Light Infantry when he died of pneumonia on 3rd October 1918. He was aged 24 and is buried in Swerford St Mary Churchyard.

He was the son of Robert and Emma Barnett, of Chapel Hill, Swerford. In 1991 he was working as a page boy in Moseley, Birmingam. On 16th Juanuary 1912 aged 17 he enlisted into the Royal Marines in Birmingham. After training in Deal he was transferred to the Plymouth division. He joined the battlecruiser HMS Indefatigable (below) in June 1913. When the war began, Indefatigable was serving with the 2nd Battlecruiser Squadron in the Mediterranean, where she unsuccessfully pursued the battlecruiser Goeban and light cruiser Breslau as they fled towards the Turkey. The ship bombarded Ottoman fortifications defending the Dardenelleson 3rd November 1914.

He then transferred to the battlecruiser HMS Infexible, which had replaced Indefatigable as flagship of the Mediterranean Fleet, and carried out further bombardment of Turkish positions in the Battle of Gallipoli. He  was then posted aboard the battleship HMS Queen Elizabeth, the only Dreadnouth to take part in the Gallipoli campaign. On 14th May 1915 he joined the pre-dreadnought battleship when she relieved the Queen Elizabeth as flagship of the Dardenelles Squadron. He joined HMS Doris an Eclipse class cruiser built in 1896 in July 1915. He served in the Mediterranean theatre with her until she returned to Plymouth on 1st January 1917. He remained in barracks at Plymouth until 7th August 1917, when he joined HMS Cumberland, an armoured cruiser built in 1903, below. She was assigned to the 5th Cruiser Squadron, conducting patrols against German raiders and escorting convoys.

ELLIS WILLIAM BARNETT was serving as a Private with the 1st/7th Battalion, The Royal Warwickshire Regiment when he was killed in action on 11th August 1917. He was aged 21, his body was never recovered from the field and he is commemorated on the Ypres Menin Gate Memorial.

He was the son of Frederick and Rachel Barnett of Swerford. He was living in Sunrising near Edgehill, working as a milkman and traction engine driver, when he enlisted into the Royal Warwickshire Regiment in Warwick on 10th March 1916. He was posted to France on 24th July 1916, joining the 1/7 in the field on 30th, seeing action on the Somme. Throughout the spring of 1917 he was dogged by ill health being hospitalized with scabies, inflamed lymphatic glands and rose measels. He was killed in action in the fighting around Ypres.

ALBERT WILLIAM BROOKS was serving as a Gunner, 156th The Oxford Heavy Battery The Royal Garrison Artillery when he died in the 12th General Hospital in Rouen on 18th February 1917.

He was aged 23 and is buried in St Sever Cemetery Extension, Rouen.

He was the son of Albert and Ellen Brooks of Swerford near Enstone and had worked as a horseman on a farm, enlisting into the 156th Oxford Heavy Battery and arriving in France with them in June 1916.

JOHN COZIER, known as Jack, was serving as a Lance Corporal with the 1st Battalion, The Hampshire Regiment, was killed in action on 1st July 1916 during the Battle of Albert. He was aged 30 and is commemorated on the Theipval Memorial, having no known grave.

He was the son of John and Fanny Cozier of Swerford. In 1908 he married Georgina Hawkin, he worked as stone mason whilst living in Swerford. He enlisted into The Oxfordshire and Buckinghamshire Light Infantry before joining the 1st Hampshires in France on 2nd June 1916, as part of the 4th Division.

In the opening phases of the Somme the great attack of July 1st 1916 on a 25 mile front began. The fourth, incuding the 1st Hampshires, were facing stronger defenses than anywhere else. They were to attack north of Beaumont Hamel where two redoubts and a quadrilateral trench were particularly strong. It was hoped that the Brigade would reach Munich trench 1000 yards behind the front line. At 0720, 10 minutes before zero hour a large mine as blown up under the German redoubt Hawthorn Ridge. This gave away the exact time of the attack. After the heavy guns stopped firing the Germans had ample time to man there positions after being in deep undamaged dugouts. The Hampshires left their trenches at 0740 followed the East Lancashires who had already been almost wiped out. Very few Hampshires made it to the wire, he majority were brought down at or short of the wire. The survivors could only seek the poor shelter of the shell holes which pitted No Mans Land and they had to lie for hours until darkness fell . This was the 1st Hampshire's worst experience of the war it had cost them 11 officers and 310 men killed and missing, 15 officers and 250 men wounded.

JESSE HERITAGE was serving as a Private with the 6th (Service) Battalion, The Oxford and Bucks Light Infantry when he was killed in action on the first day of the Battle of Langemarck on 16th August 1917. He was aged  32, his body was never recovered from the field and he is commemorated on the Tyne Cot Memorial.

He was the son of John and Mary Heritage of Swerford and worked as an agricultural labourer. In 1913 he married Mary Hazell in Hitchin, they lived in Blue Row in Swerford and had three children together. He landed in Boulogne with the 6th Ox and Bucks on 22nd July 1915, and saw action in The Battle of The Somme. On 16th August 1917 at 0445 the Battalion went into action, supported by an artillery barrage, to capture the German blockhouse at Au Bong Gite, near Landemarcke. The attack was a success with 35 prisoners taken but cost the life of Private Heritage.

HOLLIS HAWTIN ROSE was serving as a Private with the 1st Battalion, The South Staffordshire Regiment when he was killed in action at Passchendaele on 14th October 1917. He was aged 20, his body was never recovered from the field and he is commemorated on the Tyne Cot Memorial.

He was the son of Jane Rose of Swerford, living with his mother and uncle, working as a  farm labourer. He was living in Ibstock, Leicestershire when he enlisted into the Leicestershire Regiment before joining the South Staffords.

THOSE WHO SERVED IN THE FIRST WORLD WAR

ALFRED JOHNSON was born in Swerford in 1881 to parents Charles and Rachel Johnson. He was working as a farm labourer when he enlisted into the Oxfordshire & Buckinghamshire Light Infantry as a Private in Oxford on 7th June 1915. He was posted to France on 30th September 1915 and joined the 1st/4th Battalion in the field. As part of the 48th (South Midland) Division the Battalion were in action on the first day of the Somme Offensive, The Battle of Albert on 1st July 1916 and on 14th July in the Battle of Bazentin Ridge. On 23rd July 1916 they were pitched into the Battle of Pozieres and on 28th Private Johnson suffered gun shot wounds to the right thigh. After hospital treatment in France he was invalided home on 6th August 1917. After recovering he was posted to the 3rd (Depot) Battalion  in Portsmouth on 17th October 1916. He returned to the 1/4ths in France on 14th June 1917. He was wounded again with a gun shot wound to the hand on 16th August 1917 during the Battle of Langemarck, part of the Third Battle of Ypres, and was again evacuated home the following day. He returned to the 1/4ths, who had moved to Italy, in February 1918 and served out the rest of the war there, the Bulgarians surrendering on 4th November 1918. He returned to England on 31st March 1918 and was discharged on 1st May 1919.

In December 1919 he married Stella Kench in Little Tew Church and worked as a roadman for the County Council. He died in 1952 aged 71.