Wigginton is a village and civil parish about 6 miles southwest of Banbury in Oxfordshire. The village is beside the River Swere, which forms the southern boundary of the parish. 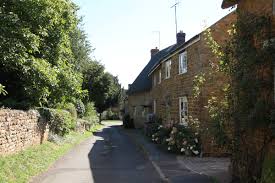 WILLIAM GEORGE HEMMINGS was serving as a Private with the 2nd Battalion, The Royal Warwickshire Regiment when he died of wounds received on 3rd September 1916, during the Battle of the Somme. He was aged 29 and is buried in Delville Wood Cemetery.

He was the son of Mark Hemmings, of Wigginton and had worked as a farm labourer.

He had enlisted into the Oxfordshire and Buckinghamshire Light Infantry before transferring to the Royal Warwicks. Joining them in France and taking part in actions on the Somme, in the Battle of Albert on 1st July 1916, The Battle of Bazentin and the attacks on High Wood. He was wounded during the Battle of Delville Wood which began on 14th July 1916. He was taken prisoner by the Germans, but died shortly after. Originally buried as an unknown British soldier in Martinpuich German Cemetery he was re-interred in Deville Wood in January 1923, being identified by his uniform and boots.

GEORGE HOWSE was serving as a Rifleman in the 14th (Service) Battalion, The Royal Irish Rifles when he died of wounds received on 6th December 1917. He was aged 27 and is buried in Rocquigny-Equancourt British Cemetery.

He was the son of George Howse and had worked as a farm labourer.

He had enlisted in to the Bedfordshire Regiment before joining the Irish Rifles. As part of the 36th Irish Divison the 14th were based in the Ancre area, fighting in the Battle of Albert from 1st July 1916 the first action in the Battle of the Somme.

RICHARD THOMAS WHITE was serving as a Private with the 14th (Service) Battalion The Royal Warwickshire Regiment when he was killed in action during the Third Battle of Ypres on 26th October 1917. He was aged 34 and is commemorated on the Tyne Cot Memorial for those with no known grave.

He was the son of Thomas and Maria White of Wiggington and had worked as a farm labourer. his younger brother William died at the Somme in 1916.

The 14th Battalion was one of Kitchener's new armies formed in 1914 and had arrived in France in July 1915. It was under the orders of the 13th Brigade in the 5th Division and saw action in several phases of the Battle of the Somme in 1916. In 1917 they took part in the Battle of Arras before being taken out of the line on 7th September.

On 24th October 1917 the 14th Royal Warwicks left their billets at Bedford House to relieve the 9th King's Royal Rifles in front line trenches in readiness for an assault on German positions at Poelderhoek Chateau, some 5 miles west of Ypres. The trenches were found to be extremely muddy, knee deep in places. The following day they took part in reconnaissance work of the enemy's front line trench systems in Poelderhoek Wood and Chateau. They also taped out assembly positions for an attack the following morning. At 0540 on 26th they went over the top and disappeared into the wood. Messages came back that despite heavy machine gun fire most platoons had passed the chateau and the Germans were fleeing. At 0730 the chateau had been surrounded and many prisoners taken. However the situation quickly deteriorated due to heavy machine gun fire from pill boxes, accurate shelling and the fact Lewis guns and rifles were failing to the excessive mud. With the Germans massing for an counter-attack the Battalion withdrew, having taken heavy causalities including Private White.

WILLIAM WHITE was serving as a Private in the 1st/23rd (County of London) Battalion, The London Regiment when he was killed in action on 16th September 1916, during the Battle of the Somme. He was aged 24 and is commemorated on the Thiepval Memorial for those with no known grave.

He was the son of Thomas and Maria White of Wiggington and had worked as a cowman. His older brother died in Ypres the following year.

He attested into the reserves of the Oxfordshire and Buckinghamshire Light Infantry on 6th December 1915 and was mobilized on 8th February 1916. On 8th June 1916 he was transferred to the London Regiment and embarked at Southampton for Le Havre, arriving on 10th. He joined the 1/23rds in the field on 3rd July 1916, they were under the orders of 47th(2nd London) Division.

On 10th September 1916 the Battalion left their billets in Lahoussouy and marched to the town of Albert and then on to Mametz Wood where they were held in reserve in readiness for the Battle of Flers-Courcelette. At 0855 the Battalion advanced 1500 yards towards the Flers Line, without opposition until they reached a sunken road to the east of High Wood. Here they faced heavy machine gun fire and took heavily casualties, including Private White.